Before going into the actual blog, I wanted to explain the Azure resources that we are going to discuss in simple words,

Key Vault is a resource in Azure to store secret information that can be accessed by your apps through managed identities or service principal authentication.

Azure Automation is a service that gives you the ability to automate tasks, do configuration changes, do updates to your azure resources using Az Cmds through runbooks in it. So, practically, we can run any automation using the Az cmds.

Azure Event Grid is a service that fires events to your chosen event handlers or webhooks for the events that happen in your Azure resources. In this blog, we are going to have KVs as the event source and Webhooks as the handler.

Now, in this blog, I am going to explain how you can use Azure Automation to detect changes in a KV and update the secret value in another KV.

Why would someone do that? OK, consider having 100s of KVs in Azure and are being used by 100s of apps. If you have a secret value that is in all these KVs and you don't want your apps connecting to multiple KVs, then it's muscle work to update the secret value in that many KVs.

So, Azure Automation and Event Grid subscriptions come in to help us detect the new version of the secret in a KV and update its value in the other KVs.

Make sure, you have access to do the below in Azure,

By default, the Azure Key Vault module is enabled in the Azure Automation. Make sure you have it in the Modules section. I am using the Runtime version 5.1 for this blog. 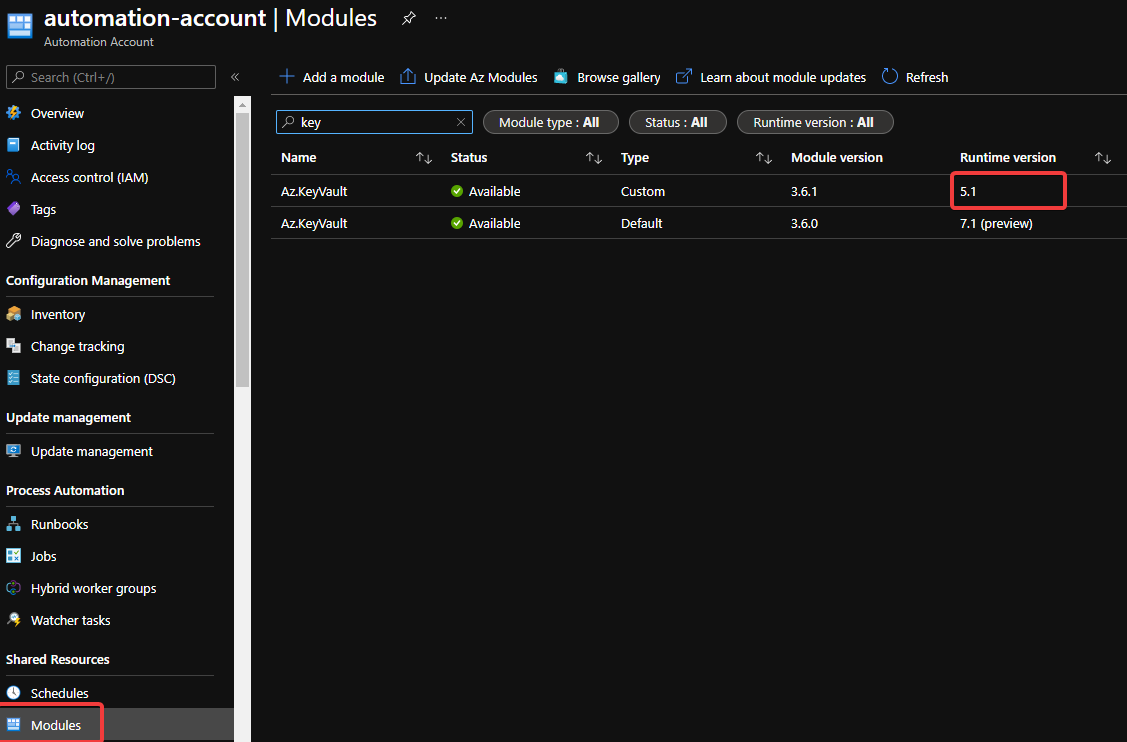 Follow this to create a new KV. For this blog, I am creating 2 Key vaults - 1 for parent and 1 for children. I want to update the secret in child KVs when there is a new version of the secret in the parent.

Both the parent and child KVs needs to be set up with Access policies including the Automation account we created in Step 1 as like in the below pic,

Populate the KVs with secrets in it by following this.

Follow this to create a Webhook under the newly created Runbook. Make sure you copy the Webhook URL while creating, as it cannot be retrieved later. We will need this URL to be added to the KV's Event Handler.

As of now, we have subscribed to the new secret version create an event in the KV, and set Runbook's Webhook as the event handler.

Step 5: Catch the event data in the Azure Automation Runbook

In this step, we will catch the event data in the webhook as use Az cmds for setting the secret value in our child KV.

Go to your Runbook's Edit window and type in the below PS code in it.

$WebhookData is the parameter where we will get the event data. I have converted the data into JSON for easier manipulation and ripped the KV's name, Secret name and event type.

After checking the event type we needed, I am using the Az cmd to authenticate the current execution.

Getting the secret's latest version value from the KV

Publish this runbook and we shall test the setup in the next step. For this blog, I have hardcoded the secret names; you can change the logic as per your need.

Now, create a new version in the Parent KV's secret. This will fire an event to the Webhook. You can monitor this in the KV's metric as like in the below pic,

You can also check the Webhook for the Last triggered value,

Output section in the Jobs section will give you the output of the PS code that was executed for the event. Here is the example output,

Did you find this article valuable?

Support Venkatesan Rethinam by becoming a sponsor. Any amount is appreciated!